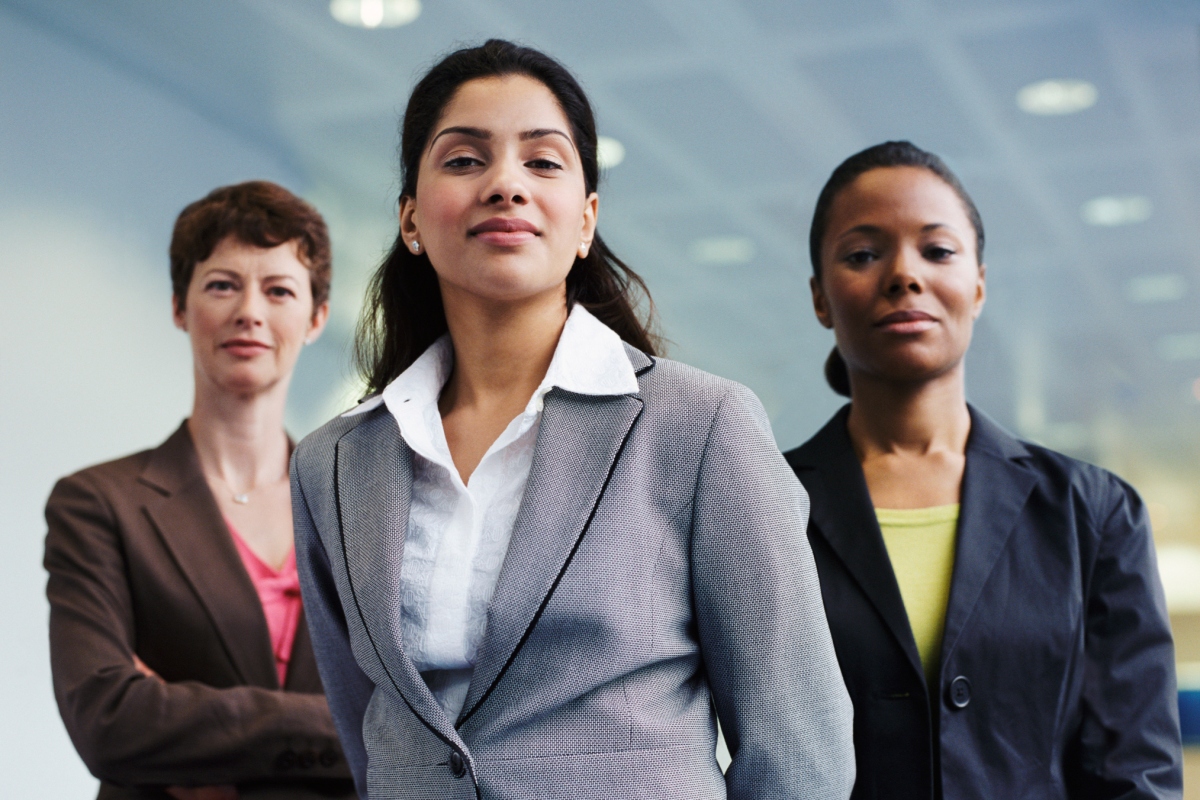 Regarding American music art, hate and human oppression. I do not condone my slow-to-evolve, ignorance embracing neighbors. I try to understand their ignorance and why they embrace illogical beliefs demeaning to human intellect.

I was a kid and teen in the 60s-70s regularly experiencing the privilege of witnessing virtually all American musicians of African descent showing off their skills, talent, peacefulness, as well as generosity composing and sharing with our world CLASSIC American music art all American can and should be proud of.

I am referring to an entire population of mega-talented American musicians and singers composing and/or performing beautiful, original American music art celebrating, praising, adoring, wooing, lamenting, loving and respecting American women, aka the MATERNAL HALF of our population.

Despite our societal turmoil during that period of American societal and human evolution, the beautiful music my American neighbors of African descent were sharing with our world convinced YOUNG ME they are peaceful, loving citizens well deserving of my admiration and respect.

However, for the past thirty years American kids and teens have been growing up listening to admitted or apparent emotionally ill American urban story-TRUTH-tellers like the late Christopher “The Notorious Big” Wallace or repeat Mr. “My Brother’s Keeper” Obama White House guests and friends Shawn “Jay Z” Carter, as well as Kendrick Lamar composing American art vividly describing VIOLENT, SUIC!DAL/HOMIC!DAL ‘people and community harming’ behaviors they engaged in or witnessed their emotionally ill family members, friends or community members engaging in. (May 18, 2015 – Rise in Suic!de by Black Children Surprises Researchers – The New York Times)

Each of these urban story-TRUTH-tellers composes and promotes American music art HATEFULLY demeaning and denigrating the MATERNAL HALF of our population, advising their fans all around our tiny blue orb that American teen girls and women should be viewed as less than human “itches” and and treated as “hores” or “hoes” unworthy of basic human respect.

Who or what is responsible for influencing their violent, hateful and female demeaning American music artistry?

What effects, if any, are felt by American elementary and JHS children regularly listening to American music art HATEFULLY demeaning and characterizing women, aka American moms, sisters, grandmas, daughters, aunts and nieces, as less than human “itches” and “hores” or “hoes” not worthy of basic human respect?

I look forward to reading YOUR thoughts and concerns with hopes we can begin an honest, FACTUAL discussion about America’s current National HEALTH CRISIS, aka America’s Culture of African American Child Abuse, Emotional Neglect and Maltreatment evolving from America’s multi-generational, ignorant, once legal Culture of Racism.

I am referring to a Culture of Child Abuse, Emotional Neglect, Abandonment and Maltreatment responsible for popular American urban story-TRUTH-tellers the late Tupac Shakur (born 1971) and Mr. Barack “My Brother’s Keeper” Obama White House guest and friend Kendrick Lamar (born 1987) vividly describing in their American art and interviews the “T.H.U.G.L.I.F.E.” and “m.A.A.d. City” Child Abuse Cultures that THROUGH NO FAULT OF THEIR OWN, deprived these American men, their childhood friends, as well as many of their elementary and JHS classmates from experiencing a SAFE, fairly or wonderfully happy American kid childhood.

Sadly, the traumatic, potentially life-scarring Criminal Child Abuse and Emotional Abandonment each of these men speaks about experiencing during a critical period of human/childhood development, resulted with them maturing into emotionally ill adults revealing in public they’ve been experiencing acute depression as well as Suicidal Thoughts for most of their lives.

Unfortunately, before he found the confidence to properly promote his #T_H_U_G_L_I_F_E Child Abuse AWARENESS concept, Tupac was brutally murdered by OTHER emotionally or mentally ill victims of America’s Culture of African American Child Abuse, Neglect and Emotional Maltreatment evolving from America’s multi-generational, ignorant, once legal Culture of Racism.

In case there is any confusion, I am writing about and sharing evidence of America’s MUCH IGNORED, oppressive, potentially life scarring African American PARENTAL CHILD CARE HEALTH CRISIS that I, as well as a growing number of my reasonably responsible, caring, concerned American neighbors believe is impeding our American neighbors of African descent from experiencing the equality and respect all peaceful, reasonably responsible Americans are entitled to enjoy. 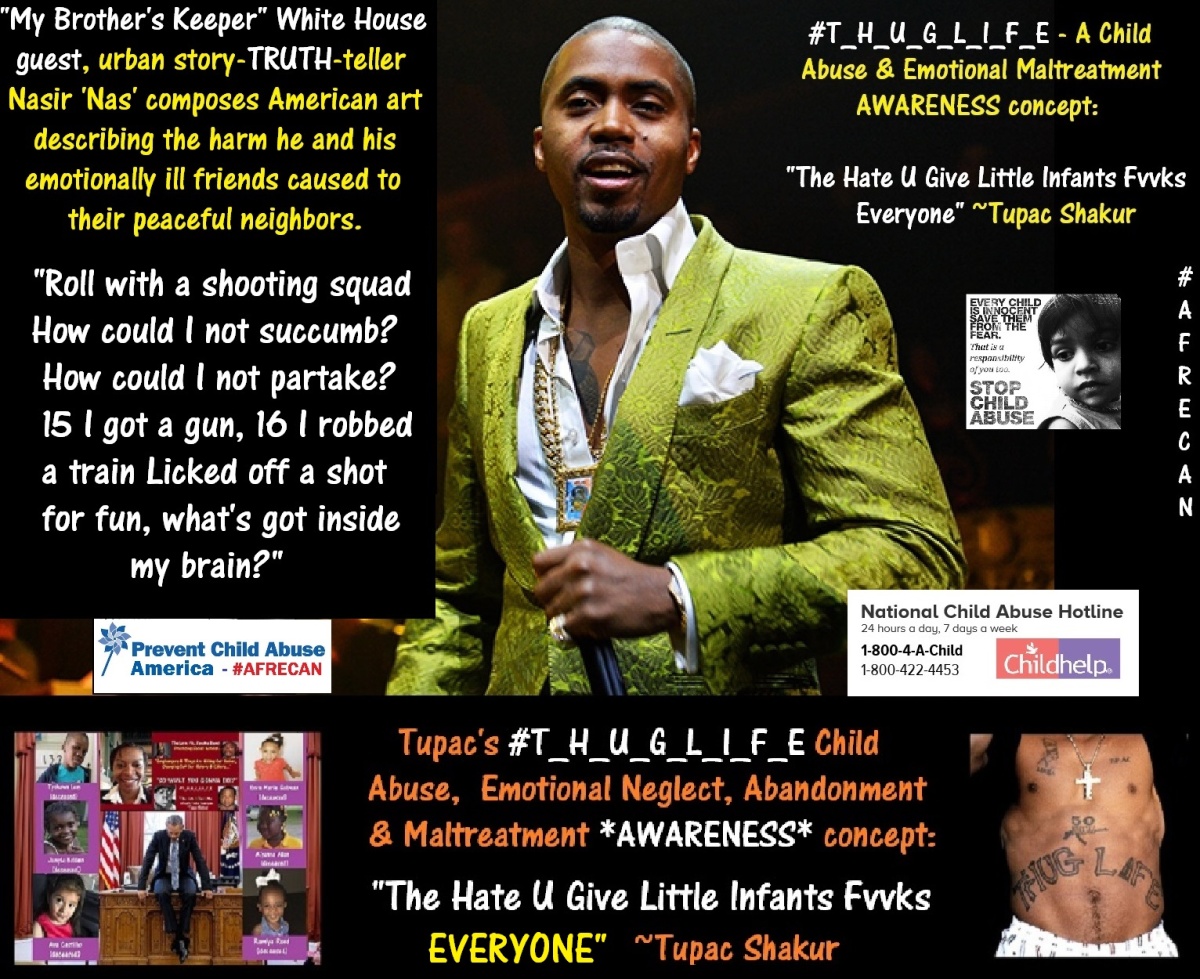 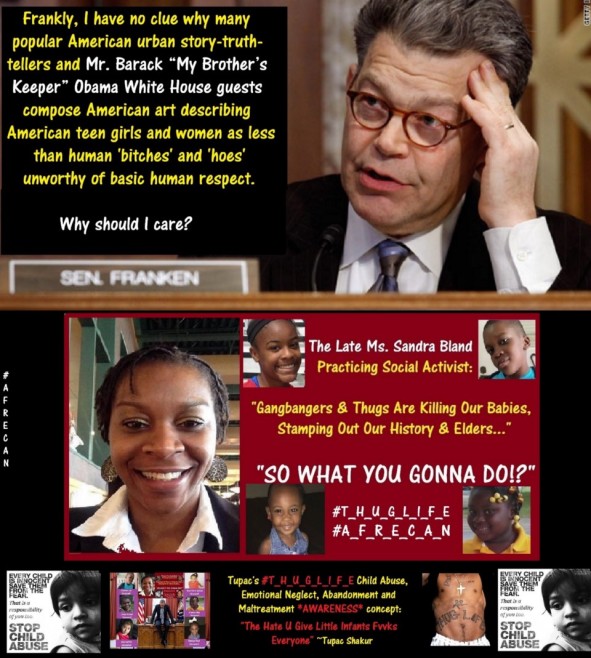